This World Does Not Belong to Us

A journey to the bowels of the earth

After years away, Lucas returns uninvited to the home he was expelled from as a child. The garden has been conquered by weeds, which blanket his mother’s beloved flowerbeds and his father’s grave alike. A lot has changed since Eloy and Felisberto were invited into the family home to work for Lucas’s father, long ago. The two hulking strangers have brought the land and everyone on it under their control—and removed nuisances like Lucas. Now everything rots. Lucas, a hardened young man, turns to a world that thrives in dirt and darkness: the world of insects. In raw, lyrical prose, García Freire portrays a world brought low by human greed, while hinting at glimmers of hope in the unlikeliest places. 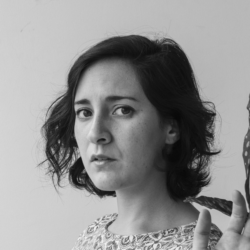 Natalia García Freire was born in Cuenca in 1991. She teaches Creative Writing at Azuay University in Ecuador and has also worked as a primary school… Read more

Praise for This World Does Not Belong to Us

“Disquieting and visceral. … García Freire unearths a brilliant sense of the miraculous from the swarming and putrid subject matter. The result is beautifully macabre.”
Publishers Weekly, starred review

“One of the debut novels that most stood out this year in Latin America.”
New York Times

“A deliciously menacing read which I just couldn’t put down. Every word punches hard. This World Does Not Belong to Us treads the fine line between beauty and horror effortlessly.”
JAN CARSON, author of The Raptures

“Visceral prose. … There is a strange, unconventional beauty to Lucas’s morbid world—a beauty that helps him endure pain and humiliation and achieve an unnerving final calm. This World Does Not Belong to Us is a bleak exploration of how all ends in death and decay.”
Foreword Reviews

“García Freire manages to make us sweat with her characters. Feel the sting of their bites. This novel demonstrates a salient maturity, exudes literary knowledge, and takes risks. The writer masters the world of emotions and the words to encapsulate it.”
El País

“This book is pure beauty, pure love for the written word.”
Cope Blog

“García Freire takes us to the deepest parts of the human condition.”
Página Dos

“Full of courage and lucidity, Natalia García Freire writes against the current, she doesn’t care about buzz or dogmas. Her writing is inhabited by the voices of literary masters. What a mature novel from a twenty-nine-year-old who knows so much about life, the passing of time, old age, the absence of God and death. There are books that can only be written by those who love plants devastatingly. This is one of them.”
El Universo

“This World Does Not Belong to Us leads the reader into the deepest, darkest regions of human existence, where what is most infected and rotten becomes beautiful and liberating.”
Toda Literatura

“A maturity that leaves you breathless. This great writer forces us to lie down on the earth and be touched by insects, plants, and matter.”
Radio Nacional España

“Natalia García Freire is unbelievably young to have written a first work of such talent.”
Relatos en construcción

“There’s an echo of Juan Rulfo’s Pedro Páramo in this novel. The return home, the search for a father or at least the memory of him. The ghosts. Only here, instead of the murmurs, we have a constant buzzing of insects and the noise of animals.”
MARÍA JOSÉ NAVIA, author of SANT

“I am moved by its tenderness, the shadow of its flight, the kingdom it comes from. Insect and poverty. Larva and death.”
DARA SCULLY, author of Animal de nieve