Amsterdam Airport, 1998. Samir Karim steps off a plane from Vietnam, flushes his fake passport down the toilet, and requests asylum. Fleeing Iraq to avoid conscription into Saddam Hussein’s army, he has spent seven years anonymously wandering through Asia. Now, safely in the heart of Europe, he is sent to an asylum center and assigned a bed in a shared dorm—where he will spend the next nine years. As he navigates his way around the absurdities of Dutch bureaucracy, Samir tries his best to get along with his 500 new housemates. Told with compassion and a unique sense of humor, this is an inspiring tale of survival, a close-up view into the hidden world of refugees and human smugglers, and a sobering reflection of our times. 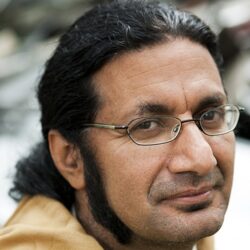 Rodaan Al Galidi is a poet and writer. Born in Iraq and trained as a civil engineer, he has lived in the Netherlands since… Read more

“Two Blankets, Three Sheets does for the beleaguered political asylum seeker stuck in legal limbo what Joseph Heller’s Catch-22 did for the hapless soldier trapped in a military at war…Translated from the Dutch into nimble and conversational English by Jonathan Reeder…it is a tale for and of our time.”
—Rayyan Al-Shawaf, Los Angeles Review of Books

“At once funny and bleak, this novel by the Iraq-born Dutch novelist draws on his personal experiences to expose the cruel and often absurd procedural challenges that immigrants must endure…an engrossing and exasperating novel. Two Blankets, Three Sheets is a tale of belonging and what it means to be human in a world that deems people less important than government protocols.” —Matt Hanson, Words Without Borders

“No other book I have read makes the soul-destroying effects of European asylum procedures more vividly clear than this one.” —Andrew Moravcsik, Foreign Affairs

“An absolute treat…Al Galidi has an eye for the absurd…all the more striking because of the lightness of the telling.” —John Self, Irish Times

“I’ve never read a book that better illustrates the human cost of the European asylum systems – their many flaws and deceptions, the bad faith with which small inconsistencies are used to return people to danger, the way the sympathies of a single, jaded interviewer can make or ruin a life, how a translation error carelessly entered into a file can stand as the damning proof of a lie for ever. This vital, eye-opening work is essential to our collective education, as a history, as a call to action, bringing one person’s suffering vividly to life in the imagination of strangers. And in the end that, as much as crafted stories and artful prose, gives literature its enduring power.” ―Dina Nayeri, author of The Ungrateful Refugee

“…expertly dissects the statelessness that plagues today’s refugees…The nuanced narrative does not hide darker currents of depression or loss of personhood. A blunt and surprisingly humorous peek at an aspect of global displacement that remains largely hidden from public view.” ―Kirkus Reviews

“This frank and poetic account of a life in limbo yields a story with universal power that transcends borders and cultures, with more than a touch of Catch-22‘s black humor.” —Shelf Awareness

“Rodaan Al Galidi’s Two Blankets, Three Sheets is a funny, maddening, sometimes absurd reckoning with the pettiness of the Dutch immigration system as seen by Samir, an Iraqi refugee who is stuck in an asylum centre for nine years. The novel, already a bestseller in the Netherlands, is openly autobiographical and, to be fair, the Dutch are just a stand-in for all entitled westerners and bureaucrats.” ―The Guardian

“A challenging portrait of Dutch hospitality. Absolutely recommended.” —The Correspondent

“The dilemma of the desire for survival set against one’s moral compass brings to mind George Orwell’s Down and Out in Paris and London; Samir’s attempts to make the best of his protracted detention has much in common with the plight of the stateless Tom Hanks in Steven Spielberg’s film The Terminal.”—DUTCH FOUNDATION FOR LITERATURE

“Al Galidi writes this novel based on his own experiences, but he manages to cover that up so well with his fluent writing style, a sense of humor and an absence of resentment. A real feat in his case. The lighthearted way in which he writes about tragic experiences makes this a very impactful book.” —Kristien Hemmerechts, author of The Woman Who Fed the Dogs

“This is an unnerving, ironical book about how lives are grinded down by endlessly stretched procedures.”―Leeuwarder Courant

“Book of the month? Book of the year! Rodaan Al Galidi has been writing beautiful books for years, but this is his absolute masterpiece. Loose, light and humoristic, and precisely for these reasons the book hits home. Don’t be mistaken: stylistically, too, this book is a testament to his mastery.” ―Bookseller Van Rossum

“In all its tragedy of miscommunication, loss of identity and meaning of life, humiliations and incapacity to truly connect, it is also a very light and humorous book.” ―Literair Nederland

“You can write emails about refugees until you’re blue in the face, but you can also, thanks to the unique power of literature, spend a few hours inside the mind and soul of one of them. By reading this tragicomic masterpiece. It will do you good.” ―De Limburger

“’The asylum center,’ Al Galidi writes, ‘is a grave where the time of a few hundred people is buried.’ For this grave he has erected a memorable monument, that functions as both a complaint and a mirror. And I, for one, was ashamed of what I saw in it.” ―Tommy Wieringa, author of Joe Speedboat

“A stunning novel about the experiences of a refugee in a heartless regime: polder-bureaucracy thick as mud. Al Galidi holds up a mirror to us. A mirror that we should all look into.” ―Adriaan van Dis

“Two Blankets, Three Sheets is a valuable and rich novel about fear, uncertainty, arbitrariness and hopelessness, written by someone who was, thankfully, able to use his new language as a lifebuoy.” ―Tzum

“Confrontational, but also humorous, Galidi provides a very complete portrait of what years of waiting in an asylum center can do to you as a human being. This is a book of absolute urgency in a time of humanitarian catastrophe that hopefully raises questions and will bring about change in our current systems. A must-read that you do not want to let go.” ―Mirjam Burger, Hebban

Why You Should Read This Book

Why You Should Read This Book

“My own country, not the Netherlands, turned me into a refugee. I am angry with Saddam Hussein, not with the jerk at the Immigration and Naturalization Service. That doesn’t mean the jerk isn’t a jerk. But it was me who came to him, whereas Saddam Hussein came to me. So more than half of the book is heavy, the rest is a little hilarious. The hilarious part is for my wallet, and the heavy part is for my heart.”
RODAAN AL GALIDI, the author

“As a descendant of immigrants myself, I was moved in many ways by this in turns hilarious and sobering story of one asylum seeker’s simple quest for a better life. My own great-grandparents, like so many others’ ancestors, but also like Samir Karim, fled the violence of their homeland and were greeted with open arms as well as a labyrinthine system of contradictory rules, language barriers, cultural bias, and homesickness. What made this book such a pleasure to translate was Al Galidi’s ability to spare no one—the players in the immigration system, his fellow asylum seekers, the Dutch people, and most of all, himself—but at the same time to treat everyone, the cheaters as well as the do-gooders, with equal compassion, in a narrative that reminds us that Samir Karim could be anyone—including you or me.”
JONATHAN REEDER, the translator

“Though there are many migrant stories, I don’t know of any written with quite the same sense of humor as Rodaan Al Galidi displays in this book. One could easily have written a very dispirited and depressing story about spending nine years of one’s life in an asylum seekers’ center, but Al Galidi, with his lust for life and his eye for the absurd, has written an incredibly funny novel based on his own experiences as a refugee from Iraq. In a way he has written a feel-good novel about things one cannot feel good about. And that makes him a writer who is both generous and unique.”
JUDITH UYTERLINDE, the publisher